Best Original Tiramisù in the World 2022

This recipe is by Giuseppe Salvador, World Champion of Tiramisù 2022 🏆

Start by weighing the egg yolk, add the sugar and whip until you obtain a light cream. Incorporate the mascarpone and whip with electric whips until the cream becomes thick. Proceed by soaking the ladyfingers in the previously prepared coffee for three seconds, being careful not to get them too wet.
Place a mould on the plate and start composing the tiramisu with a layer of ladyfingers and continue with a generous amount of cream. Make another layer of ladyfingers and cream.
For the final decoration, after removing the mould, decorate with a pastry bag by making strips of cream on top of the tiramisu. Sprinkle with cocoa and serve! 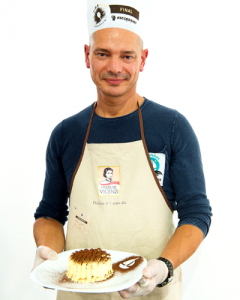