This recipe is by Marina Summa, World Champion of Creative Tiramisu 2022 🏆

Whisk together the egg yolk and sugar. Weigh 30 g of the mixture to which you incorporate the mascarpone using a spatula.
Place the ladyfingers next to each other, then proceed to create the desired shape using a pastry cutter (in this case a rectangular mould).
Place the mould on the plate and proceed with the first layer of ‘cupped’ ladyfingers (cut to the desired shape) and soaked in coffee. Crush the ladyfingers well and proceed with a layer of previously prepared cream. Crumble some Sicilian cannoli wafers and candied orange cubes over the cream. Create a second layer of well-crushed ladyfingers; finish with a layer of cream and level the dessert with a spatula.
Prepare an icing separately using coffee, cocoa and caster sugar (heated with a blowtorch or in a small saucepan). Place the icing on top of the cake and level again with the spatula. When you have finished creating the tiramisu layers, clean the dish and remove the mould. Decorate with a pastry bag and give the final touch with cannoli wafers, orange zest and pistachios. 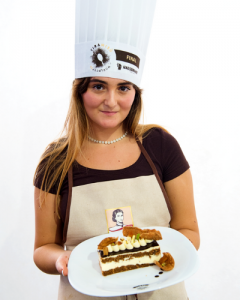